I have toiled away with the new Windows 8 OS, the new Visual Studio 2012, and the new Office 13/365 to present you, dear reader, with this fine set of charts: 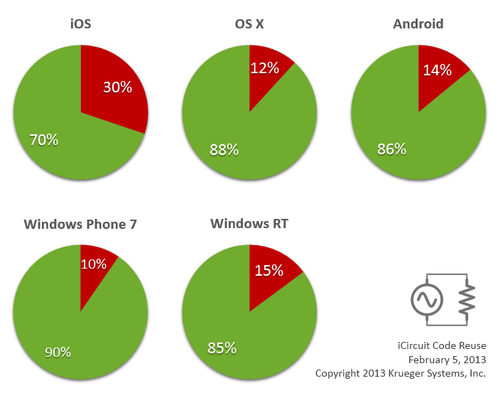 (This post is the 5th in a series where I describe the code reuse of iCircuit while porting it from platform to platform. Check out the previousposts.)

Yesterday I completed the Metro, I mean Windows Store Modern App, version of iCircuit and achieved 85% code reuse from my other platforms! You should check it out, it’s amazing to see Windows 8 actually do something useful! ;-)

To build this version, I used the work from the Windows Phone 7 port to get the basic app working in a XAML/C# solution. From there I “just” had to build up a modern desktop/tablet UI for the app. The initial port took about 1 day. Then I spent about 2 months refining the UI to feel good.

Thanks to the amazing .NET/Mono platform I was able to reuse 39,000 lines of code and had to write 6,700 lines of platform dependent code. These figures represent a code reuse of 85%. This is on-par with all my other ports, and so I deem it a success.

That said, I’m a little disappointed that I had to write 6,700 lines. I was hoping for code reuse more inline with the OS X port of the app where I only had to write 4,000 loc. I blame WinRT’s immaturity. You would be shocked to see some of the crazy bits of code I had to put in because the Win8 platform, while very rich, is also very generic and doesn’t help you at all to build standard apps (document based, tools, etc.) That is to say, Cocoa is a very mature platform designed to make apps feature-rich and consistent while also making the developer’s life easy. WinRT on the other hand gives you rectangles and a blog post that says “good luck”.

Thanks for tuning in one more time! I hope you found this at least a tiny bit educational!

So which platform is next? I’m thinking of porting it to Windows 7, but will wait to see how sales do first. :-) In the mean time, MonoTouch and I need to spend some quality time together…