Many moons ago I created a cross platform library for rendering vector graphics called CrossGraphics. It was good. It supported lots of platforms and was fast. Very fast in fact because it was designed for my app iCircuit which was already a CPU hog and had to run on 2010 era mobile hardware. To be fast, I played loosey goosey with cross platform accuracy (they mostly rendered the same) and features (who needs gradients?).

But the times, they are a changin’. My phone’s CPU is 64-bits and massive. Apple now supports GPU based rendering (finally that G stands for something other than Triangle). And, the fact is, though flat is in style, you really do need gradients.

Today, I would like to announce NGraphics. A cross platform PCL to satisfy your 2D vector drawing needs. It’s available on nuget now!

NGraphics is a big improvement over CrossGraphics. Here’s why I’m excited:

Gradients! It supports both the linear and radial variety with any number of color stops.

Paths! Crazy paths with arcs can now be used and abused.

Images! Images can be loaded from streams, created by rendering onto a canvas, or built up pixel by pixel.

SVG Reading and Writing! CrossGraphics was able to output SVG, but NGraphics can read ‘em too.

Unit Tests! It turns out that getting all the platforms to behave themselves requires more than blind faith. NGraphics has a unit test suite that runs on all the platforms (4) and generates images to easily spot consistency errors.

Editor! I love to use code to draw things, but I hate waiting for the compiler (or worse, the IDE). So I wrote a little editor that lets you type C# code and get a live preview of the graphic you are creating. I love this thing… 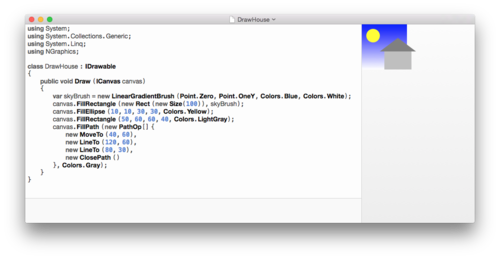 I hope you’ll check out NGraphics! It’s as simple as going to NuGet and searching for “NGraphics”. If you have the time, I would love bug reports, feature requests, and especially pull requests over at the NGraphics project.