TL;DR I implemented a proportional-integral feedback controller to control the speed of a DC motor using a gyroscope. I wrote it in F# using a functional programming style. The work was easily ported to run on Wilderness Labs’ Meadow IoT hardware. 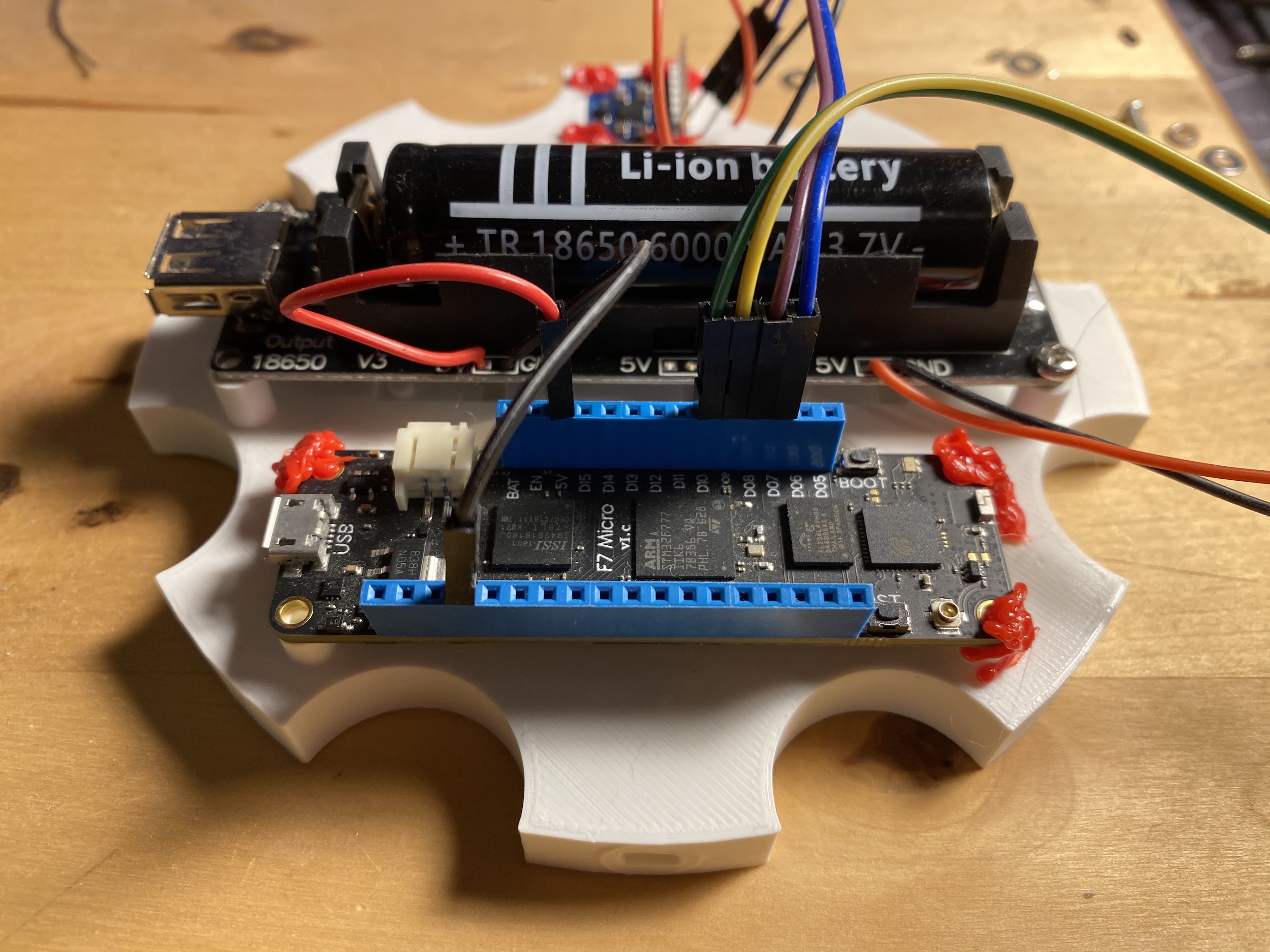 In this blog I would like to implement a simple but robust control theory that was taught to me in college. This blog post is one in a series of “F# Advent” posts coordinated by Sergey Tihon so I will be implementing it all using my favorite programming language F#.

Embedded controls such as these are often implemented in imperative languages like C with a lot of variable mutation.

I want to explore implementing a DC motor control algorithm in functional style instead of the imperative style. I also want to do it while embracing F#’s strong type checking and units of measure support.

I will try to spare you the heavy math but this is definitely going to be a nerdy post. Enjoy!

Motors are some of the simplest but most entertaining devices out there to play with. You can use them to make cars, clocks, drones, and automatic fidget spinners.

The technique I’m going to describe here is a general one that can be applied to a variety of control tasks, not just motors.

Easy peasy! That’s the general outline. There is of course a million ways to accomplish all of the above. So let’s start with the easy stuff: inputs.

But I won’t actually be controlling the motor using voltages, instead I’m going to be using a square wave with a varying duty cycle called a PWM (pulse width modulation) to mimic different voltages.

Let’s model the motor input. I’m going to take advantage of F#’s unit system to make sure all my math and my functions are physically correct.

I created a helper function makeMotorInput that ensures the duty cycles are in a valid range.

We have a lot of good code now to work with inputs, let’s look at the outputs of the motor.

When it comes to motors we can control any of these things:

You can also control its acceleration or the force it produces against an object. But as my controls professor always said, “don’t try to control forces”. So, I’ll leave that as an exercise for the reader.

Controlling the speed of a motor is probably the most common scenario. There are multiple sensors you can use to measure the speed: you could use the same position sensors and do some math, you can use rotary encoders, you can measure minor fluctuation is voltages produced by the motor, you can use potentiometers, … There are a lot of options.

I’m going to use a less common sensor to measure the rotation of the motor: a gyroscope. Gyroscopes measure angular velocity, just what I want. They’re more complicated to use than the other options, but I think they’re fun so I’m going to use them in this project. I will be using an MPU6050 that is capable of measuring linear accelerations and angular velocities on all three axes. I’ll just be monitoring the one rotational axis.

Now that we have defined our inputs and outputs we can discuss how to control the motor to achieve desired speed.

The standard negative feedback control loop looks like this:

This three-part loop is general purpose enough to solve any control problem where you’re trying to achieve a measurable goal.

The real magic happens in the function control. It is responsible for deciding what the inputs should be to the motor based upon how far off we are from our desired speed. This kind of controller is called a regulating controller because it’s designed to bring whatever error it is given down to 0. It does that by increasing the input when the error gets larger and decreasing it when it’s smaller.

One simple way to implement the controller is to make the input proportional to the error:

This kind of control certainly works, but it has some negative side effects. First, it’s tricky decide what that proportion should be. Trial and error is often used though I will discuss alternatives to trial and error later. But worse than that, it’s jittery! The control will never be happy as it always has some error and will always force the motor to jitter back and forth as it tries to meet the desired output.

What we need is a calming influence. Something called an integral controller.

Integral control doesn’t act unless the error has accumulated for a bit of time. It’s slower acting than the proportional controller, but it is easier to tune and really helps the controller to relax when it’s near the desired output. The formal definition of the controller involves integrating the error. Integrating is just a fancy word for adding a bunch of things up. We’re going to add up the error. But we’re not going to do it forever, just the last few seconds worth of error. To do that, I’m going to create a datatype that can keep track of everything.

Let’s test it out by creating one that can only hold 2 errors.

We can see that it discarded the first error when the third error arrived.

Now that we have an integrator, we can write the integral control function:

This integral controller still has a proportion parameter because we still want to be able to tune how aggressive or passive the controller is.

We can combine these two controllers to get the best of both worlds. This proportional-integral controller is called a PI controller in control theory.

In order to test this controller and implement in hardware, I will define a hardware abstraction layer in the form of an interface.

This is the only mutable object in the code and it’s mutable because real hardware is mutable. Once you have performed an action on it, it’s impossible to undo that action.

Let’s also define some test hardware so we can validate our algorithms.

With that simple abstraction, we can implement the control loop.

I am going to implement the control loop as a classic fold operation over an infinite sequence of time.

This architecture keeps the control loop nice and functional and makes it very easy to test different states.

In order to use fold, you need three things:

For the sequence I am going to create a general purpose sampler that calls a function to read some data over fixed time intervals. It even blocks the thread for those intervals to keep things in real time.

We can use that sampler to sample the outputs of the motor.

Let’s test it out.

That’s working great! Now let’s put it all together. 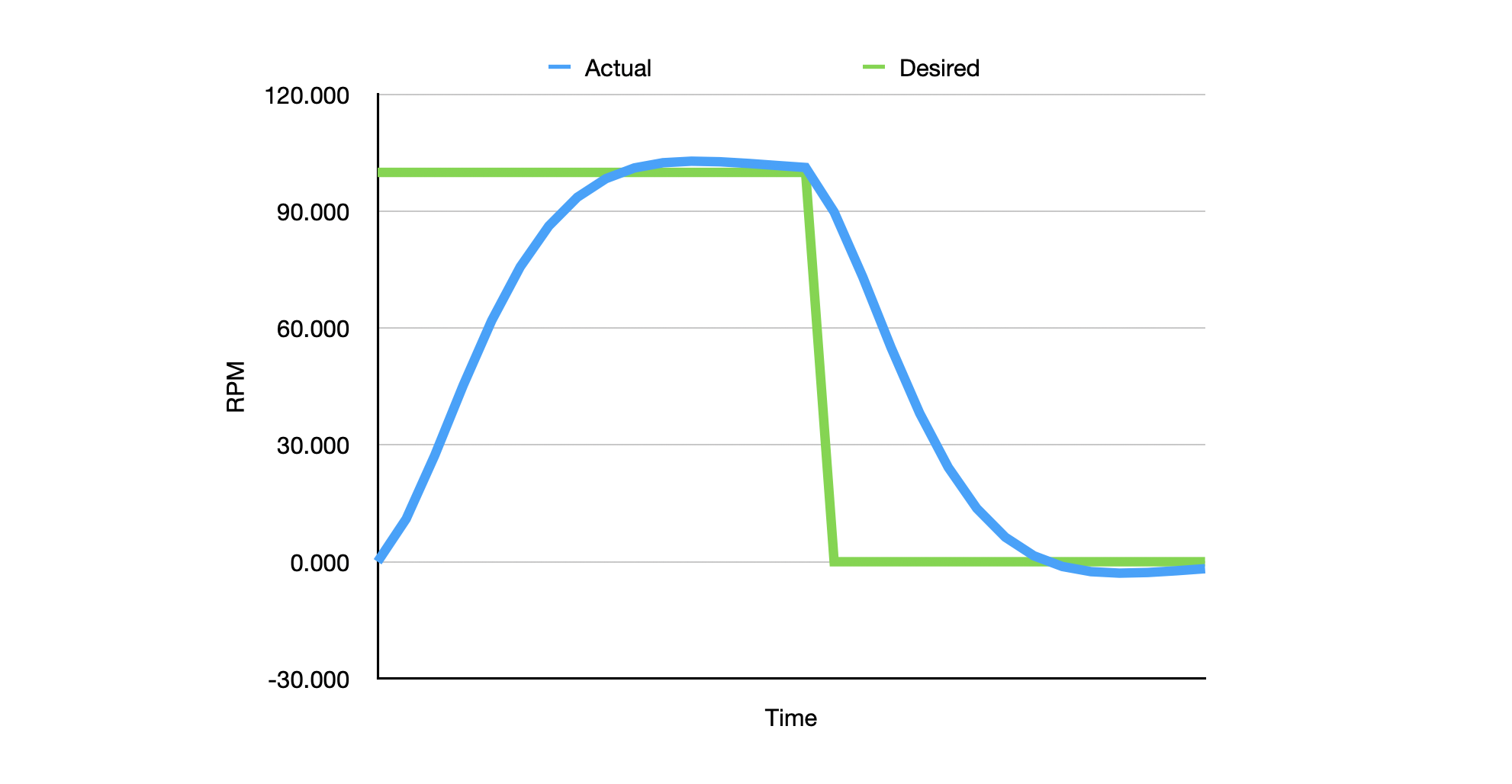 That worked! You can see that the controller even overshot the mark and then had to backtrack.

You can play with the kp and ki values to see how different values affect how quickly the controller speeds up the motor.

With the abstract interface IHardware, it’s very easy to run this code on real hardware.

To demonstrate this, I’m going to code against the Meadow F7 Board from Wilderness Labs. This board runs .NET code including F# so is a perfect digital controller for this application.

The board uses the Meadow API that has abstractions for all sorts of hardware.

In just 20 lines of code I was able to implement the IHardware interface. For details, I hope you’ll check out the Meadow Documentation.

Now it’s a matter of executing the control loop:

For details, I hope you’ll check out the Meadow Documentation.

I hope you enjoyed this functional look into control theory using my favorite language F#.

We were able to build a strongly typed code base to control the speed of a motor with minimal mutation. I hope this code demonstrates some of the benefits functional programming can bring to a space that is generally dominated by procedural programming.

This was my also my first F# Advent post. I hope you enjoyed it and are staying safe and healthy!